It’s been over a week since I posted any updates on progress. I have been spending my time setting up my priming station as discussed in the last post. All I am waiting for now is the delivery of the primer itself, which I ordered from Aircraft Spruce. It was supposed to arrive two days ago but UPS apparently dropped it on the last day and made a big mess (I can only imagine). I received notification that the package was damaged and had been discarded.

I’ve also spent my time reading ahead in the plans and familiarizing myself with the construction of the rudder and elevators. There’s a note on the Horizontal Stabilizer drawing that says “Trim horizontal stabilizer rear spar to allow for elevator control horns to pivot forward and contact the elevator ‘down’ control stop.” You can see it here: 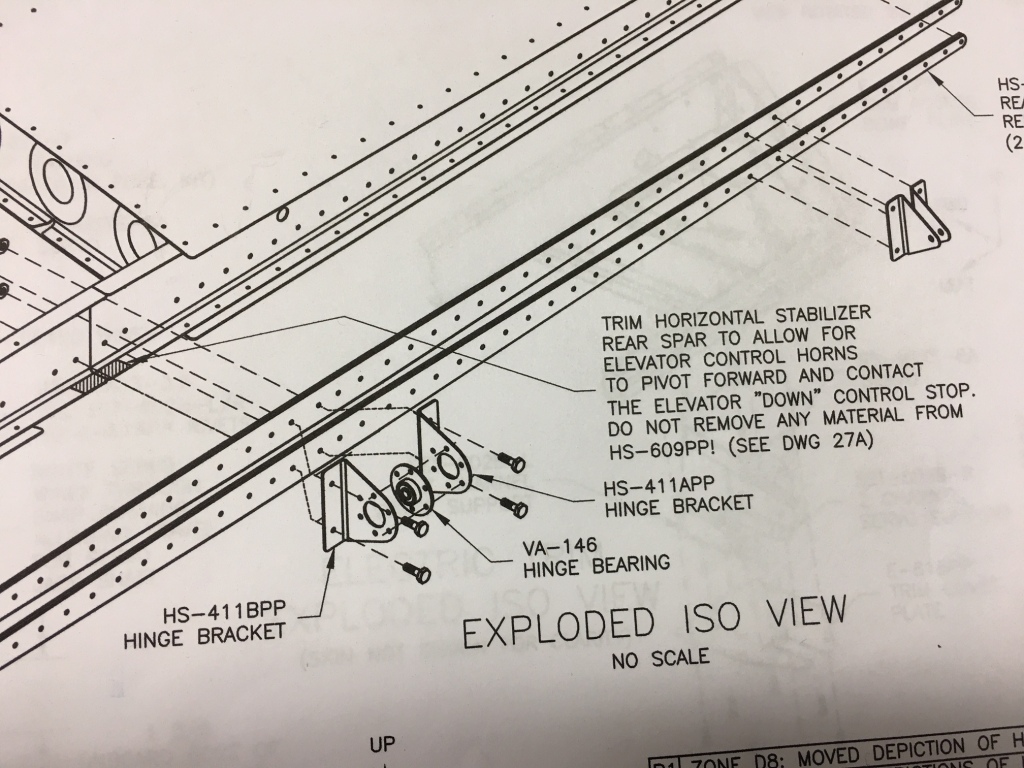 There’s no mention of this in the instructions until you get to the part (much later) where the elevators are fitted to the horizontal stabilizer. And here, there’s little detail except to say that the spar should be trimmed to make room for the elevator control horns to move through their entire range. The assumption is that the trimming will be done on the completed horizontal stabilizer. One problem with this is that the HS-609PP reinforcement bars are in place and MUST NOT be nicked, scratched, gouged, or otherwise damaged in the process lest the structural integrity of the stabilizer be compromised.

It looks to me like it would be much easier and safer to just do this now, before the rear spar is assembled. In fact, I don’t know how I would dress and radius the corners at the center of the spar if I were to do this after assembly. I called Van’s Builder Support to run the idea by them and the technician I spoke to said that he saw no reason not to do the trimming now. I measured the elevator control horns and came to a width of 2.5 inches for the gap, which will leave plenty of clearance on the sides of the horns. The depth of the trim will be 1/2 inch which will be approximately to the start of the reinforcement bar.

Here is what the trimmed spar now looks like:

When my primer arrives in a couple of days, I will prime the horizontal stabilizer spars, ribs, and reinforcement components and start doing my first serious riveting. Can’t wait!

View all posts by rossted